Skip to content
HomeNewsPlaystation 4: It's Real, And It's Coming This Year

So after weeks of hype from Sony themselves, plus developers around them, it finally happened. Sony today announced the Playstation 4 at their 2013 Playstation Meeting event in New York. They announced the console in a two hour event, showing off just what the system is capable of, some of the games that’ll be hitting the system, and not all that much else. However, there’s three core bits of info you need to know about the system – it’s coming in 2013, it uses a new Dual Shock controller, and it’s quite possibly the most online intensive console ever designed.

Let’s begin with that – a lot of the online functionality of the system is really quite something. For starters, the Dual Shock 4 has a share button on controller which allows you to share captured video (which you can sift through, pick out the stuff you really want to show) on your social networks. Not to mention it supports the ability to stream games via UStream, which in turn allows comments to be shown up on screen. The system also implements a Remote Assistance like feature, which allows players to pop into your game and help you out – think an interactive version of Nintendo’s Super Guide functionality from their more recent Mario games, and you’re on the right idea.

To top this off, Sony finally detailed just how their purchase of cloud gaming service Gaikai will factor into the Playstation 4. What you’ll be able to do is effectively try anything instantly. Simply hit a button to ‘try’ a demo, and you’ll be playing a streamed version of it. It also wouldn’t be a stretch to assume that you’ll be able to do the same thing for full games, once they’ve started downloading, to give you a bit of a headstart. Though while this functionality was confirmed to be possible, it won’t be a requirement. 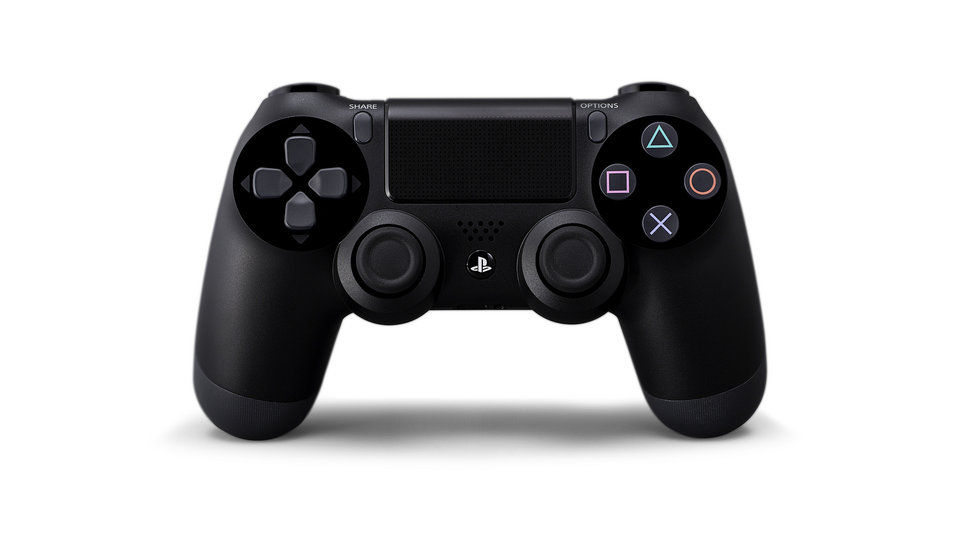 As for the Dual Shock 4, it’s gone under a significant design change. For starters, there aren’t any start and select buttons, now relegated to the “options” button as you can see above. The triggers have also been redesigned so they’re a little closer to the Xbox 360 style controller. Speaking of which, the controller does have a speaker jack on the bottom, and the console will ship with a mono headset. Not to mention it’ll also be possible for sound effects to be piped in via said port, which is a nice little touch. The controller will retain its motion sensor, but it’ll be an improved version of SIXAXIS, hopefully now taking better advantage of the newly announced iteration of the Playstation Eye. Though to not be left out, the Move controller will be supported with the PS4. Also, the PS4 won’t need to be turned on to power the DS4.

Other neat little features of the system are that you’ll be able to enter into a ‘sleep state’ by from the console itself, and easily be right back to where you left off once you turn it on. The system also supports the ability to purchase games via a web browser or smartphone, and have them download to your PS4 without you being at home. Unfortunately, native PS3 compatibility wasn’t announced, but you will be able to play your older games via the Gaikai service. Which is rather unfortunate. Though speaking of the system, we recieved no word on a new disc format (as per Playstation hardware tradition), but we did get some info on its specs:

We also saw plenty of games announced and shown off in some capacity. Beginning with Sony, first party efforts include Knack, a platformer headed up by Japan Studio; DriveClub, a racing game headed up by Evolution Studios (developers of Motorstorm); inFamous: Second Son, the latest in the  open world superhuman series by Sucker Punch; and Killzone: Shadow Fall; taking place 30 years after the end of Killzone 3, and developed by Guerilla Games. Media Molecule made an appearance to show off some interesting sculpting tech using the Playstation Move, but no announcement of what they’re working on next. None of the games were given a specific release date.

There was also plenty of announcements and demonstrations from third parties. Capcom appeared to unveil it’s next generation engine (nicknamed Panta Rhei), and a game to go with it – Deep Down. Think something along the lines of Dark Souls and Monster Hunter, and you’ve got an idea. It’s also set to have a lot of social functionality, which should be interesting. Jonathan Blow appeared and showed off his new game, The Witness, getting a timed exclusive release on PS4; Ubisoft showed off Watch_Dogs running on a PS4, and confirmed it as a launch title for the system; Square announced that a new Final Fantasy game is in the works and we’ll know more come E3 time; Blizzard FINALLY confirmed Diablo 3 for both Playstation’3 3 & 4, plus Bungie announced that Destiny will be hitting the PS4 and with exclusive content. Sony also used this time to show off a wall of developers they’ve signed as third party partners, which include the usual suspects, but also some curios, like Bohemia Interactive (ARMA/DayZ) and Paradox Interactive (Europa Universalis).

All in all, it’s a very interesting system. Really keen to see how this’ll all play out in Australian circumstances, but the console has plenty of potential. Cannot wait to see and hear more of it.